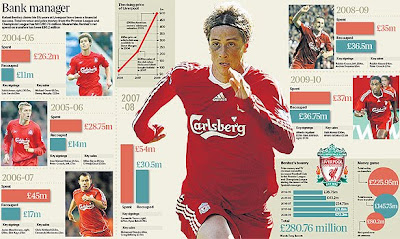 
Rafael Benitez: I can walk through Anfield storm


Noticia de TimesONline
November can be grim on Merseyside. It is barely past lunchtime and darkness is falling nearly as heavily as the rain. There is a gloom around Liverpool’s academy in Kirkby that mirrors the state of the club.

The team are seventh in the Barclays Premier League after five defeats in 12 games — they lost just twice last season — and on the verge of an exit from the Champions League. The mood is downbeat.

Enter Rafael Benítez and in an instant the academy staff are bathing in a little Spanish sunshine. Beaming a huge smile, he sweeps out of the rain in a flurry of backslaps, handshakes and hugs. This is no icy analyst. He is relaxed, in casual trousers and a V-necked pullover, and at ease with his world.

The acres of critical newsprint, the hours of Rafa-bashing on the phone-ins, have not shaken his confidence. He sits in an office, with its balcony overlooking the windswept training pitches, like a man secure about his domain.

But football clubs never sit still. They are either moving forwards or sliding backwards. Which direction are Liverpool heading? Benítez is not backwards about coming forward.

“The club was nearly sold for £85 million five years ago. Now the price is £500 million. We must be doing something right.

“We are much better now than we were three or four years ago in every single thing — in the commercial department, the marketing department, in football.

“The majority of the fans, especially the ones who go to the stadium, realise the team is working and improving, and is better than before. To achieve 86 points in the league last season is part of the progression. The direction of the club is right. But everyone wants to win and we are disappointed when we don’t win any game or any trophy.”

The poor start to the season has brought a maelstrom of criticism, but Benítez feels that few observers understand the full scale of the job at Anfield.

His tenure in the manager’s chair has been played out against a backdrop of behind-the-scenes turmoil. Financial problems and a lack of support from senior club officials have hampered his efforts. The irony is that the recent blip in form has come during the most stable period of his 5½-year term.

A new five-year contract, signed in February, gave the Spaniard control over the academy and the appointment of Christian Purslow as chief executive in the summer provided backup in the boardroom.

This has not always been the case. Two years ago, George Gillett Jr and Tom Hicks, the owners, approached Jürgen Klinsmann about the possibility of replacing Benítez. Even before that, the manager’s relationship with Rick Parry, the former chief executive, was uneasy. Parry’s conservative nature clashed with Benítez’s aggressive attitude in the transfer market and many of the top targets went unsigned.

“You prepare your list of players and have No 1 target, No 2, then the third one,” Benítez says. “If you lose the first one, normally they’ve signed for another English club. If you lose them to your rivals, it’s worse. Every year you have to work very hard to be ready and sometimes another team gets there first. It is frustrating.”

That frustration is underlined every time Gareth Barry, Florent Malouda or Nemanja Vidic turn out against Liverpool, but the loss of Aaron Ramsey to Arsenal is particularly galling.

Benítez had agreed a deal to sign the talented young midfield player from Cardiff City for a £1.5m initial fee, with a similar amount to follow, but the transaction stalled at board level before Arsenal came in with a £5m bid.

The emphasis on youthful talent is no surprise. “When I arrived we had a lot of players we needed to change,” Benítez says. “We had to replace these players year on year. The first team were bad and it was the worse for the reserves.

“So we had to buy fringe players and take a gamble. Some of these players have been good and some not good enough for us. It’s a risk you have to accept when you have not got too much money available. The problem started at the academy. We weren’t producing players.”

The production line that served up Robbie Fowler, Steve McManaman, Michael Owen, Steven Gerrard and Jamie Carragher had ground to a halt. Steve Heighway, the academy director, was replaced by Frank McParland and Benítez took a hands-on role.

“This is the first year of my second five years and the first time I can have some influence in the academy,” he says. “We are trying to build something and leave a legacy for the future.

“When we talk about the young players we’ve brought in, the cost for them is about £5m. Players like Gulacsi, Pacheco, Ayala, Ngog, Insúa. The value of Insúa in the marketplace now would pay for all the signing of the young players in the last five years. We had to build foundations so we can win in the future.” The shortage of young Scousers coming through the ranks aggravates the manager, however.

“I want to see the academy producing local players,” Benítez says. “We didn’t produce too many so we had to look elsewhere to be able to find the new generation of players that will be at the heart of the team and the club. We need local players.”

A shrewd move was to bring back Kenny Dalglish to assist at Kirkby. The iconic former player and manager is performing a number of roles and the manager is delighted to have him involved. “He was a good signing, no?” Benítez says with a twinkle.

“He is someone who knows the club, has a very good mentality and is strong enough mentally to defend the club as an ambassador. With his role in the academy, he attracts players.”

But Benítez knows how important it is to start winning soon. Will his team bounce back and earn a Champions League place at the end of the season? “I have a lot of confidence we will finish in the top four,” he says. “But my target is the next game. It is easier for me to give confidence to the players if we get three points against Manchester City [on Saturday].”

Benítez is notorious for his long working hours and attention to detail, so how does he cope with defeat? “When you lose or draw you go home disappointed,” he says. “But you can’t get too low because it is important to me to go to Melwood, be strong and pick up the players.

“I have a lot of confidence and that gets bigger when I talk to fans. They say, ‘Keep going, keep smiling’. Can we be better? Yes. We will be better.”

And then he is ready to go. In the foyer, one of the boys’ teams are coming in from the rain. They hold back a little, nervous to approach the boss, but he beckons them over, asking the name of each.

One is from Brazil and Benítez addresses him in Portuguese and begins a conversation about the beach in Rio. The boys all laugh and the mood is lifted. It’s a knack Benítez has. Imagine how much fun everyone will have when his side start winning.